There are many children in our schools, who really struggle to learn to read. They make little progress, no matter how much help they receive.  By the time they are teenagers, they are thoroughly disillusioned by school.

Parents of these children are also desperate for answers. What have they done wrong? They see other children stimulated by school and making so much more progress.  Why are their children tired at the end of the day, and miserable when school is mentioned? They wonder how might they have done things differently.

I know these parents exist because I have been working with them for over 20 years and they bring me their stories of frustration and despair: frustration because teachers continually ask why they don’t listen to their children read, buy them books and read with them?

Why Haven’t these sparents done more?

These parents are in despair, because they have done all these things and more, asking for SEN support, paying for reading tutors, books and resources that might help. Nothing has made any difference.

I would like to share with you the story of one of these parents and her daughter Suzanne:

Suzanne Is Intelligent, but she Can’t Read!

Suzanne was 11 when Claire contacted me, having been given my name by a friend.  Clutching at straws, she thought she would try one more avenue of help for her daughter.

She was in despair when she rang and the whole sad, sorry story tumbled out. Suzanne had struggled with reading from the very beginning.  None of the attempts made to help her,  had made any difference, even sending her to a private school with small classes.

Claire had also sent Suzanne to a private tutor, a former head.  After 4 years of regular reading tuition, this well-meaning lady suggested that Suzanne might have brain damage.

Parents know when a Child is Intelligent!

‘Suzanne is intelligent,’ Claire kept telling me. ‘I know she is intelligent. She just doesn’t get reading.’  How many times have I heard that, and ultimately had to agree?  I listened to Claire’s anguish with great sadness and made my usual offer, of a free test and sample lesson, to show how I would help Suzanne.  Claire listened politely and then asked:

I replied that she didn’t! The only way I could prove to her that I could teach Suzanne to read in 12-15 hours was by doing it. But I did offer to return all her money, if I failed.

It took Just 11 hours to teach Suzanne to Read!

In fact, I taught Suzanne to read in just 11 one-hour sessions, accompanied by one hour’s practise at home with Claire. At the end of 11 hours, she was able to read ‘Lizzy Zip Mouth’ by Jacqueline Wilson. After another two years she was at the top of her group in all her subjects. She was, as Claire had said, extremely intelligent.

Parents question what I Do!

Throughout this period Claire kept asking me why my method were working ,and why the school wasn’t using similar methods.  Not an easy question to answer, but this is my theory:

The high illiteracy rate in this country is proof that this is not the case. It is a sad fact that most children who go into SEN, remain there throughout their school life?

Why are my methods different?

The real answer to Claire’s question was simple: I succeed, because my method works!  It is based on the findings of recent research on how children think and learn. It’s predicated on the notion that reading, initially, is a skill and skills are taught through doing, not by learning loads of theory (see my blog post ‘The Daily Yawn’).

I work systematically through the sounds of our language, and ensure that the skills required for reading are thoroughly rehearsed.  My focus is on the relationship between the sounds (we make when we speak) and the symbol (we write down), rather than on letters and what they might ‘say’.  And I don’t waste a student’s time getting her to rote learn anything.

It was a great sadness and joy to say goodbye to Suzanne, and to explain to her that she didn’t need me anymore. I was also able to remind her of how much she had benefited from the self-discipline and hard work habits she had acquired during her years of struggle. With her new-found ability to read, she could really move forward.

Claire wrote to me a few weeks later and I treasure her comments. They reassure me that what I do is valuable: 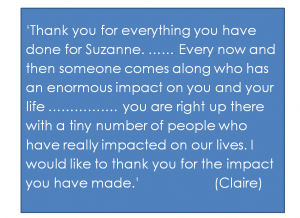 Claire also wrote at great length about Suzanne’s struggle, as she began to master the skill of reading.  I have copied it below to show how hard it is, for both parent and child, when the child cannot read.

AN INSIGHT INTO THE WORLD OF ‘FAILING’ CHILDREN

Written by Claire about her daughter Suzanne

Once upon a time a beautiful baby girl was born. Although she appeared helpless and vulnerable she wasn’t and it wasn’t long before she had every need met by the giant forms surrounding her. At a few days old she could communicate her hunger, her thirst, her discomfort and her desire to be touched and loved. ….. From perceived helplessness and vulnerability, she had already learned how to survive.

The baby was loved, nurtured and cherished by all those to whom she was dear. As a toddler she started to try and make sense of the world. She learned she was tall, beautiful, shy and quiet.……. her brother was older, stronger and rougher than …… her Dad worked a lot and her Mum was often busy. ………

She went through school with her friends and peers and this little girl learned much, which was very useful to her. For her role within her peer group she learned that she had power, kudos and status, when playing sport and she learned how to be valued for her kindness, empathy, support and forgiving nature. Within school she learned how to develop a role for herself. She became helpful, well-behaved, polite, charming and delightful. She learned that she could gain recognition and could please through her character, if not her academic achievements.

Within the classroom this little girl was a smart little cookie, hot as mustard. By now she was older and wiser, by now she had learned a lot: that she didn’t ‘get it’; but most other people did ‘get it’.  Now she knew she was no good at maths, English, French, geography, history or spelling. It didn’t matter how hard she tried she just wasn’t like the rest of her friends. Her friends were nice but still asked why she got ‘different’ work.

Her parents were supportive, but still wondering what was ‘wrong’ with their child. Her grandparents convinced themselves that she would ‘catch up’. Her teachers encouraged, supported, sympathised, empathised did the absolute best they could and saw the best in her.  They had seen it all before. They simply didn’t know what to do – ‘it was just one of those things’.

As she was so very clever this little girl developed ways to protect herself from the pain caused by having learned that she just didn’t ‘get it’. She often day dreamed or stopped listening, she would chat and giggle, she was even smart enough to work out that by playing ‘dumb’ people would not have too many high expectations of her. How astute is that?

Of course other smart children who have similar difficulties often respond differently and take on the role of class clown or of a very naughty, disruptive child. One suggestion for the definition of intelligence is ‘What one does when one does not know what to do’. Isn’t shutting down or acting out an intelligent response to a situation where a child does not know what to do?

The little girl’s Mum knew that if her daughter continued to learn these clever strategies her daughter’s potential would never be realised. Everyone would continue to see her child as tall, beautiful, shy, quiet, lacking in confidence, having low self esteem, not so good anymore – in fact quite rebellious, troubled, difficult, misunderstood…..

As with all fairy tales this one has a happy ending. The little girls Mum happened across a fairy godmother who opened up a magic book and waved her magic wand and everyone lived happily ever after.

As it happens, there is nothing magical about the ending. By pure chance and luck (and a little persistence), the Mum found a highly skilled, experienced, trained Reading Therapist (Maggie), who was passionate about equipping children with the knowledge and skills they need to enable them to read. Reading is the key to progress within the education system and getting the right reading programme is the key to getting EVERY child to read.

I don’t work miracles.  But I do teach children to read effectively, whatever their age.  And if your child struggles with reading, I can do the same for her.

Or maybe you know someone who has a child who is struggling at school, particularly with reading? Perhaps you can tell them Suzanne’s story. 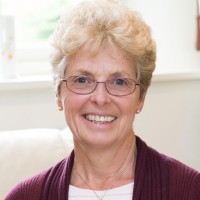 I learnt to read effectively at the age of 14, and was the Mother of a child who found reading really frustrating! Subsequently, I trained as a teacher, psychotherapist and reading therapist, enabling me to teach hundreds of children to read. This experience has given me an insight into the problems faced by children, when they struggle with reading, and having struggled myself, I feel supremely qualified to write about these problems, including the guilt felt by their parents. In addition, the development of my system, Write2Read is the culmination of this work.